When our Managing Director,  Henry Southworth, first moved into his villa on C/ Castillo in El Capistrano, pictured below, his one regret was that there was only one cat nearby, in fact living next door, although spending much of the day in Henry’s own garden.

One of this cat’s most notable attributes was its incessant meowing when interacted with – a trait that, in certain parts of the UK, would be described as ‘rabbitting on’. Hence Henry gave him the name of Rabbit (sometimes changed to ‘Minnie’, following his habit of mooching off in a very stately fashion once he had tired of the interaction (after ‘Minnie the Moocher’, the Cab Calloway Country Music number)). Of course his owner had her own name for Rabbit – Puppe – which turned out to mean ‘bunny rabbit’ in her own (Finnish) language – although based on his ears, rather than his conversation. Quite a remarkable coincidence.

More recently an all-black cat – imaginatively named Blackie – turned up in the area and more or less adopted Henry. Very nervous at first, they became fast friends, arriving to be fed at regular intervals when Henry was staying out here, although having to avoid a jealous Rabbit each time that she turned up. You can see from the picture of Rabbit (in Henry’s gateway, not his own) how he obviously regarded his place in the universe. 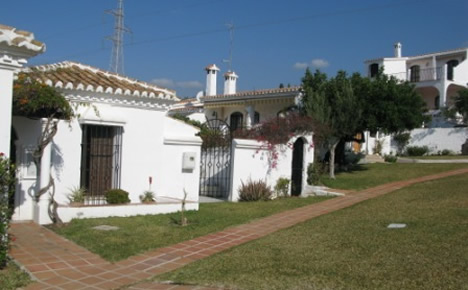 Note added in December 2015. Sadly, Rabbit is no more, but has been replaced with yet another all-black cat, named 'Morris' by his owner, although Henry prefers to call him by the rather more French-sounding 'Maurice', with the accent on the final syllable. Maurice can be seen in the picture opposite below, although you have to be aware that he is somewhat larger and fluffier than Blackie to tell them apart.

Note added in November 2017. Blackie had been found in a very poor state, having very likely been poisoned. Then some neighbours shut her up in their cellar area before departing Nerja, despite having been told that she was missing, and she failed to survive. Then early in 2018 Maurice also succumbed to poisoning. 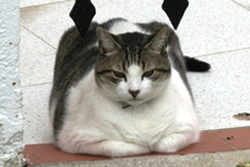 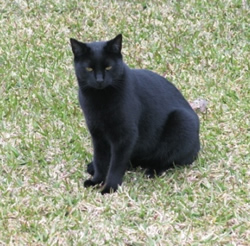 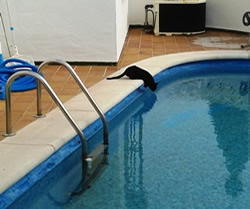 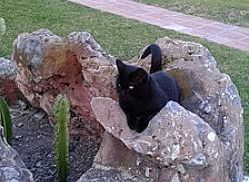