When Henry Southworth first began to invest in rental property in El Capistrano, a young black and white cat was abandoned, pregnant, in the grounds just above the main swimming pool, just below the fish pond (at the junction of C/ Violetas and C/ Olivos), referred to elsewhere. Although she gave birth to four kittens, only one survived, the most feisty and adventurous one. Taking initial responsibility for these two cats, Henry named them Thelma (the daughter) and Louise (the mother).

Thelma remained in the area of C/ Violetas (below) for the whole of 17 years, allowing a variety of different occupants to feed and pamper her. The second photograph here shows her predilection for spending her days on one of the high-up window sills that she regarded as having been constructed for cats’ benefit (it must be true: the house owner later installed a comfortable blanket for her here). 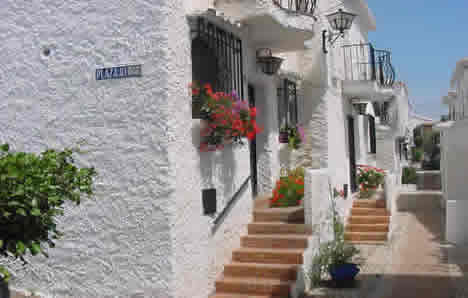 Thelma well illustrates the propensity for the Capistrano cats to possess a variety of names, being named Carlos by one of her benefactors (‘I know she’s female’, she said, ‘but it just suits her’). Out of many stories that could be told about her is that of the annual AGM held several years ago now, in the nearby social salon. Just as the meeting was called to order by our esteemed chairman – a respectful hush descending – than Thelma marched into this room, filled with more than a hundred people, right down to the front, meowing loudly at the top of her voice, demanding to know why she hadn’t been invited.

More recently, Henry heard that a black and white cat had been found run over just at (Thelma’s) end of C/ Violetas. Although assured that it wasn’t her, he remained quite distraught until his next visit to Capistrano. However before his (rental, and hence unfamiliar) car had even come to a halt at the end of C/ Violetas, Thelma came dashing along, meowing at the top of her voice, to reassure him that she was OK, something that she had never done before or since. Henry is convinced that some psychic element was in operation here.

Although not now living all that far away, Louise (sometimes known as 'Smudger') didn’t really seem to remember that Thelma is her daughter, although they did not clash when they come into proximity (see picture below right). For many years, Louise lived on and off with Fufi’s owner, Josephine, in a house backing on to the car park just off Camino de Ronda, and behind C/ Violetas (see picture below).

In fact she spent her days sitting in the car park itself, and became widely regarded as being in charge of its operation. Later Louise made friends with the dog who lives next door to Josephine (and its owners!), and moved in here, although still maintaining her car park duties. 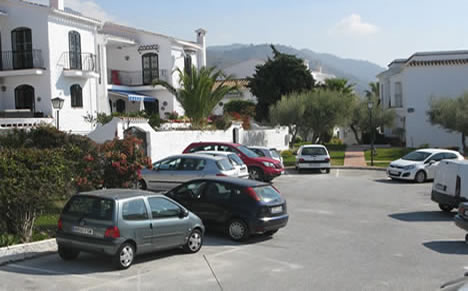 Note added in May 2017. Sadly, Louise, who had reached the age of about 16, and had become very frail, has not been seen for several weeks, and it may well be that she has passed on. Indeed Fufi now appears to have taken over the job of managing her car park.

Note added in June 2018. Thankfully Thelma lived on to the age of 17, although several years ago she herself had to have one eye removed, due to a cancerous growth, but recovered very well, returnning to her old sprightly self. Then, early in 2018, she was discovered to have apparently broken her leg, which had subsequently re-set, but at a most painful looking angle. Sadly, as a street cat, she had nobody to think about taking responsibility for this, until Henry came out. She was then taken in by Mirja (and then Henry when out here), but developed a kidney infection, causing her to lose a lot of weight. She struggled on, still with her original friendly, but strong, personality, until developing cancer in her leg break, which then started to spread, and it was necessary to have her put down. Thus Thelma was the last of the original CLIC website cats to pass on. She is sadly missed by so many people, not only residents, but also regular guests. 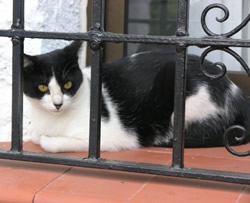 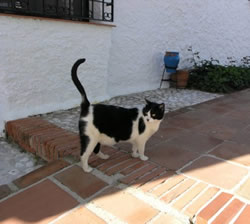 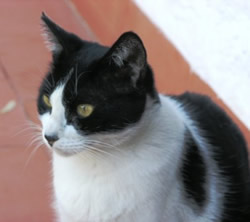 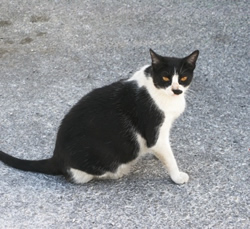 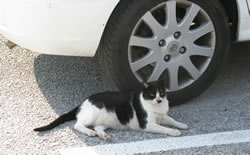 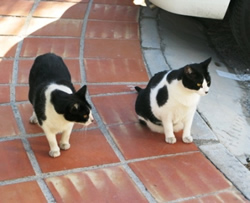 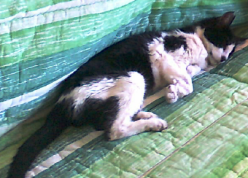 Thelma - towards the end