In addition to Blackie, two other all-black cats now regularly turn up for attention (and food) at Henry Southworth’s villa. In fact most all-black cats tend to look the same, and it can be very difficult to tell them apart. Indeed Henry arrived once back at his villa, announcing that he had met Blackie outside, only to be told that she was asleep on his chair!

The one most difficult to distinguish from Blackie is Fufi, who actually lives quite some distance away with a lady called Josephine, next to the Violetas car park (see Thelma & Louise). In fact Henry originally found that he appeared to be being visited by two almost identical black cats – Blackie and one who he named Charlie (short for Charcoal), until he began to suspect that Charlie was actually Fufi. But how do you tell? Simple: he just cut the end off Charlie’s tail (just the last quarter of an inch of fur, to leave a square tip, rather than a pointed one: don't worry, it soon grew back), and then later contacted Josephine to ask whether she had noticed any difference in Fufi. ‘Yes’, she replied, ‘some b*stard has cut off the end of his tail’! Fufi rather likes to sleep, exactly like a leopard, in the branches of a tree in Josephine’s back garden. Note added in 2017: Fufi just disappeared from the car park, and is assumed to have passed on.

Santos is a real character, and lives with several other cats on the C/ Castillo road itself, all belonging to CLIC stalwart, Mirja, who regularly commutes by camper van between her home in El Capistrano, and that in her native country of Sweden – taking most of her cats with her each time. Santos is probably the most self-confident of all the Capistrano cats, and is not easily dissuaded from coming inside the house when he visits - a bit of a problem if Blackie is already curled up there. 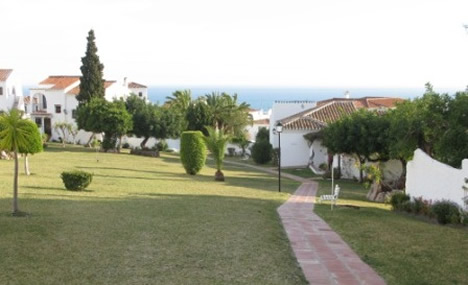 Note added in December 2015. It is with great sadness that we have to report that Santos has now passed away, albeit at a grand old age. His place appears to have been taken by a ginger tabby and white cat, revelling in the name of Gustavo, whose picture can be seen opposite.

Gustavo gets on very well with all the other cats that live with Mirja, although he is in danger of having his leadership role usurped by a new occupant by the name of Theo - see the section on 'The Car Park Cats' for further details. 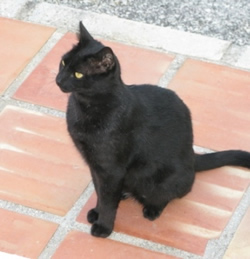 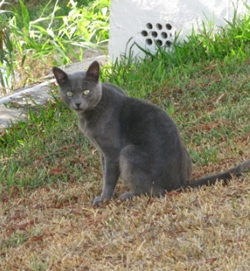